In simple terms, a density refers to and ascending level or layer of consciousness.

Densities, however, are folded into each other.

If you imagine this torus coming together into a horn torus (below), you can see that the entire plane of information goes through the singular point in the center of the torus. This singularity is the next density, and each density level has a unity point linking it all the way up to source. 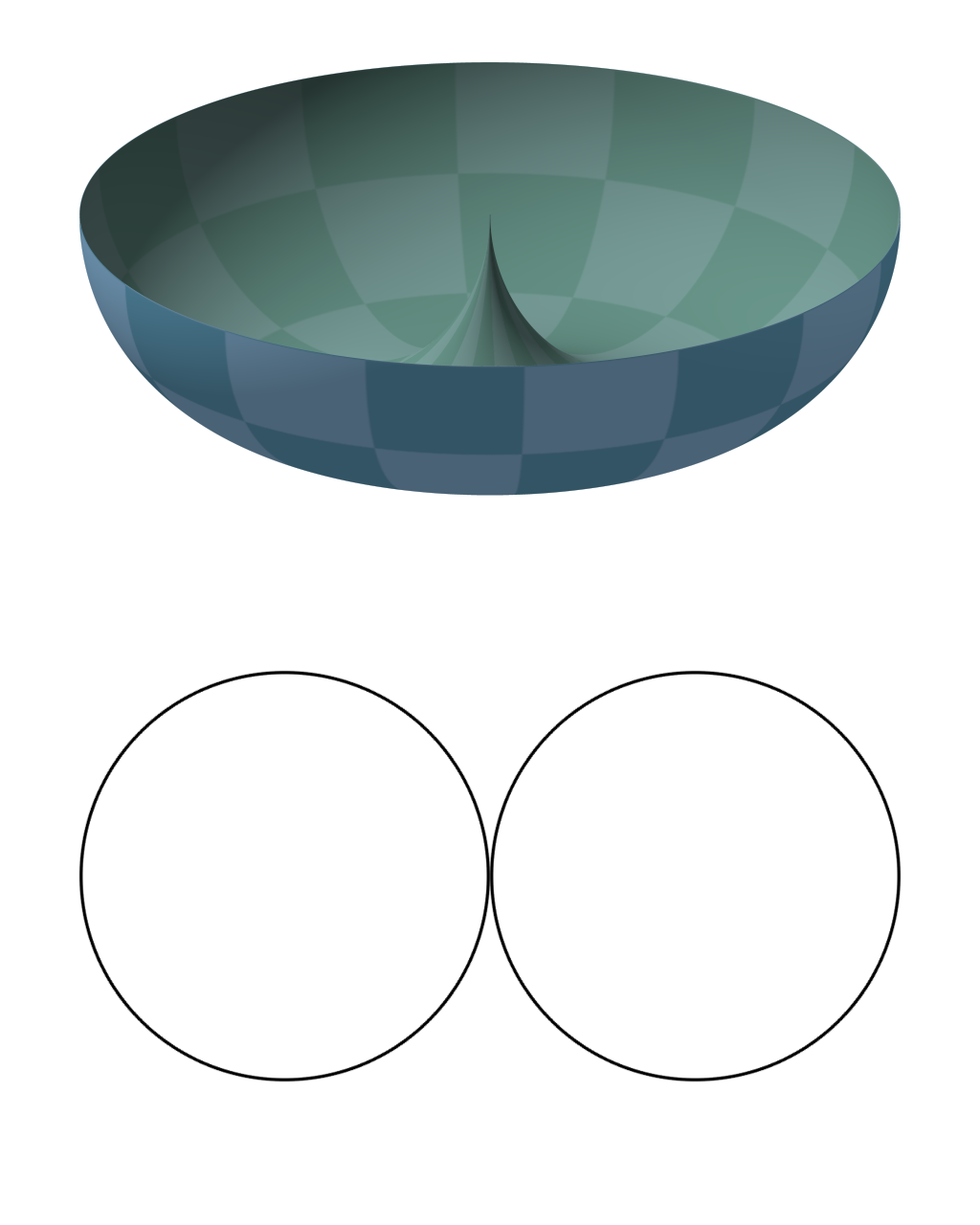 All is one, and one is all.

Now you may be thinking, how is this different from dimensions? I thought the next dimension was just every snapshot of the dimensions below?

The difference between density growth and dimensional growth is geometrical, as dimensions are planar, and densities are fractal.

Though a higher dimension can access any of the lower levels, it can only view them through moving in one “direction” or the other, with the directional movement being on the “axis” representing that dimension, and that "axis: is the combination of every extension of the previous dimensions.

We can visualize this by sliding a plane along an X or Y axis. Dimensions allow energy (which is movement and Matter) to create the space that is needed for a rich variety of experience through interaction.

We can say that dimensions work according to planar geometry.

Density growth is returning to this unity point, a central point which realizes the connection to the next level by combining all consciousness on its current level.

In this unity experience, you are now floating around a greater toroidal consciousness, again seeking unity. This greater toroidal consciousness, or bigger bubble, is made up of a bunch of bubbles which all are the completion of the previous level via a different experience of finding unity. It may help to imagine each bubble as a star in a galaxy.

Okay, so we know a density contains all of the information of all of the densities it contains, and the lower density always has access to the higher densities information, through a central core, which is the root of the fractal expression.

As we go through each density, imagine what the core and the expansion represents.

We’re going to go through all the densities, but first let’s look at the groups of densities.

The first six densities are the physical densities, where consciousness may take a physical vessel.

Above the sixth density there is nothing left to experience as a physical entity, it is just energetic understanding, “Being” in a non-physical sense.

Four of these nonphysical densities exist within our universe, incarnating as collective consciousnesses, and planets harboring soul collectives, Solar systems, galaxies, and collectives of galaxies.

The universe itself is its own density, as these first 10 combined together.

Outside of that, we have a density some call the multiverse, God Brain, or God Soul that is a collective of all universes.

Beyond that is the creator.

Let’s talk about each level in more detail.

I’m going to spend the most time on the seventh through twelfth, as the Ra Material does a good job of the first six. Check out a video summary of RA here.

The first density is Atoms and elemental substances – Earth, Air, Fire, Water. This is the first level of experience the creator has in our universe.

In the second density, consciousness starts to interact with itself in an entity / environment way. Growth and expansion toward oneness is expressed in plants reaching toward the Sun. This energy is also expressed in animals seeking mates and food.

In the third density, self awareness develops, and with it choice, guarded by free will. The third density is unique because it operates under a veil of forgetting, or illusionary separation from source.

This allows us to make an honest decision of how we wish to progress through the rest of the physical-body densities, by experiencing unity, or by experiencing separation.

Though if we choose separation we can’t make it past the start of the sixth density, as creating illusions of separation can only get you so far.

In the fourth density we learn about unconditional love. This experience vibrates our future and past to the highest truth with love.

Imagine a string that is tacked down in the middle, with both sides flowing freely beside. The string represents our timeline, and tack represents the present moment.

Love pulls the string taut, creating the greatest and most resonant future and past in the now.

As you can imagine, this creates the possibility for near-instant healing and manifestation, while still being in the physical world. Collective attention allows our strings to harmonize with others, vibrating together to experience a more loving future and past through the now.

The Earth Human collective is now in the beginning of Fourth density, moving toward a more unified, loving society. This loving connection aligns us all with a bright future, as well as uncovers our incredible hidden past.

Within the fifth density, our vibration can transport us to any perspective in the now, and not only that, we can experience any future and past for that now.

Creation is unbounded, as any thought form will bounce back to you through any number of realities, to meet you exactly at the vibration you sent out. Wisdom is limitless, as every angle of every possible future and past is experienceable.

The last physical experience is removing the illusion of self and other to realize and experience all as one. Remember that each density is all of the previous densities experiences put together, so the sixth density truly is oneness of all experiences. As we graduate through this density, we integrate all wisdom into oneness, and shed our unique perspective, to enter into the non-physical densities of collective consciousness.

The seventh density is the first non-physical experience. This experience can be expressed in what we might call a collective consciousness, or a grid of consciousness.

A seventh density entity can also be described as a collective soul, sometimes called an oversoul. A soul is an energetic part of us that goes on after we die, and an oversoul is a higher fractal iteration of our soul, meaning that we are a connected offshoot of an oversoul, like a twig to a branch.

When we die, we return to the oversoul to be re-incarnated, and the nature of this re-incarnation will align with our desire to create an exciting and fulfilling experience, usually growing in a direction we are headed, but sometimes starting again in a new direction entirely.

Our oversoul may incarnate as any number of beings at the same time. We are already incarnated in possibly billions of beings right now, and I mean just in this fourth dimensional now.

How does this work? Seventh density entities are not bounded by time, so they create a planet through collapsing possibilities with intention to manifest and coalesce matter, space, dust, etc, etc, into an entire history and future of a planetary experience.

Oversouls don’t just wake up on a Tuesday and pop a planet in front of a star. Think back to the timeshape example where we imagined a buzzing earth timeshape. This will give you a visual of a seventh density entity.

Gaia is a seventh density entity, a collection of all consciousness on the planet, all the way down to the first density rocks and crystals. Gaia experiences all this life now, with the entire future and history of every being accessible at every moment. Plus every possible future and history…, all in the now.

Oversouls combine to create the next level, the Solar system consciousness.

Our galaxy is the collection of all the solar consciousnesses, connected through the core like a faster-than-light-speed internet connection. All of the information from every level we talked about thus far is accessible through this galactic core.

This ninth density consciousness governs the ascension process of all physical entities in the galaxy, as it is made up of all of these beings.

Visualizing the galaxy with the core at your heart chakra is a powerful meditation technique to integrate this energy directly into your ascension process.

Everything in the universe, including all 12 matrices, each with their 10 densities, form the 11th density, universal consciousness.

The universe is having a physical incarnation, much like us. It will leave this incarnation, and return to the 12th density consciousness, where it may make another incarnation.

Our universe exists alongside an infinite number of universes. Some of these universes are very similar to ours, carrying this 7 dimension / 11 density / 12 matrix structure. Others are completely different, and may have no physical beings in them at all. All do, however, have experience, and expansion.

The connection of all of these universes creates a so-called God Brain, God Mind or God Soul where all universes are born, and where they return to when they leave their incarnation. This is like an oversoul of universes, where a universal consciousness may choose to expand in a new direction after they “disincarnate”. Similar to other collective consciousnesses, and stars in a galaxy, groups of countless universes co-create in clusters, creating all forms of possibilities.

So what do we get when we combine all collectives of all universes? The infinite creator!

So what can create the infinite creator?

So, What is nothingness?

Nothingness is, by definition.. nothing, and therefore cannot exist. If nothingness can not, and does not exist, everything Must exist because nothing can be nothing.

There must not be nothing anywhere.

Nothing can be nothing.

Everything must be something,

And something must be everywhere.

And that everything as everything is the source creator, kept alive and in balance forever by nonexistent nothingness.

Previous Lesson
Back to Course
Next Lesson
Login
Accessing this course requires a login, please enter your credentials below!
Lost Your Password?